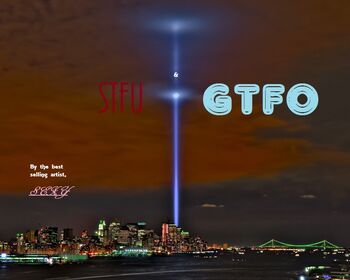 STFU AND GTFO (stylized as STFU & GTFO) is the second single by everyone's favorite artist, Sexy. It is Sexy's second single, as the first one being with the one everyone hates, the bitch (she doesn't get to be bolded because she's unsexy) in Take A Hint Ciria.

Retrieved from "https://lizzaydizzay.fandom.com/wiki/STFU_AND_GTFO?oldid=4777"
Community content is available under CC-BY-SA unless otherwise noted.